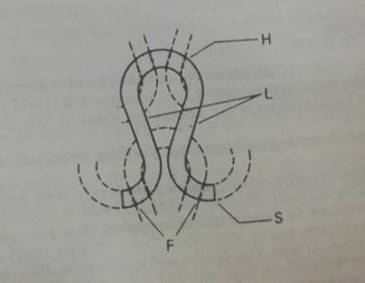 The needle loop is the basic nuit of knitted structure. When tension in the fabric is balanced and there is sufficient take-away tension during knitting, it is an upright noose formed in the needle hook. It consists of a head(H) and two side limbs or legs(L). At the base of each leg is a foot(F), which meshes through the head of the loop formed at the previous knitting cycle, usually by that needle. The yarn passes from the foot of one loop into the foot and leg of the next loop formed by it.

If the loop is the first loop knitted on that needle, its feet and legs will not be restricted and it will open out to give the appearance of a tuck loop. If the loops are knitted on a flat machine with a pressing down device and no take-down tension, the loops will be more rounded and will tend to incline due to the traversing movement of the presser.

In weft knitting, the feet are normally open because the yarn continues to be supllied in one direction(except at the selvedges of straight knitting machine). Exceptionally, closed loops have occasionally been produced in the past on the bearded needle sinkerwheel machine, by twisting a loop over as it is transferred to another needle, or by using a twizzle beard which closed onto the back of the needle so that, at the loop is cast-off, it twists over itself.